Of the ceremony of the Introit

The deacon, opening the door of the Temple, admits the congregation and takes his stand between the small altar and the font. (There should be a doorkeeper to attend to the admission.)

The deacon advances and bows before the open shrine where the Graal is exalted. He kisses the Book of the Law three times, opens it, and places it upon the super-altar. He turns West.

Do what thou wilt shall be the whole of the Law. I proclaim the Law of Light, Life, Love, and Liberty in the name of ΙΑΩ.

Love is the law, love under will.

The deacon goes to his place between the altar of incense and the font, faces East, and gives the step and sign of a Man and a Brother. All imitate him.

The deacon and all the people.

I believe in one secret and ineffable lord; and in one Star in the Company of Stars of whose fire we are created, and to which we shall return; and in one Father of Life, Mystery of Mystery, in His name chaos,[4] the sole viceregent of the Sun upon the Earth; and in one Air the nourisher of all that breathes.

And I believe in one Earth, the Mother of us all, and in one Womb wherein all men are begotten, and wherein they shall rest, Mystery of Mystery, in Her name babalon.

And I believe in the Serpent and the Lion, Mystery of Mystery, in His name baphomet.

And I believe in one Gnostic and Catholic Church of Light, Life, Love and Liberty, the Word of whose Law is ΘΕΛΗΜΑ.

And I believe in the communion of Saints.

And, forasmuch as meat and drink are transmuted in us daily into spiritual substance, I believe in the Miracle of the Mass.

And I confess one Baptism of Wisdom whereby we accomplish the Miracle of Incarnation.

And I confess my life one, individual, and eternal that was, and is, and is to come.

Greeting of Earth and Heaven!

All give the hailing sign of a Magician, the deacon leading.

The priestess, the negative child on her left, the positive child on her right, ascends the steps of the High Altar. They await her below. She places the Paten before the Graal. Having adored it, she descends, and with the children following her, the positive next her, she moves in a serpentine manner involving 3½ circles of the Temple. (Deosil about altar, widdershins about font, deosil about altar and font, widdershins about altar, and so to the Tomb in the west.) She draws her sword and pulls down the Veil therewith.

By the power of

[17] that thou mayst administer the virtues to the Brethren.

She sheathes the Sword.

The priest, issuing from the Tomb, holding the Lance erect with both hands, right over left, against his breast, takes the first three regular steps. He then gives the Lance to the priestess and gives the three penal signs.

I am a man among men.

He takes again the Lance and lowers it. He rises.

How should I be worthy to administer the virtues to the Brethren?

The priestess takes from the child the water and the salt, and mixes them in the font.

Let the salt of Earth admonish the Water to bear the virtue of the Great Sea. (Genuflects.) Mother, be thou adored!

She returns to the West.

on priest with open hand doth she make, over his forehead, breast and body.

Be the priest pure of body and soul!

The priestess takes the censer from the child, and places it on the small altar. She puts incense therein.

Let the Fire and the Air make sweet the world! (Genuflects.) Father, be thou adored!

She returns West, and makes

with the censer before the priest, thrice as before.

Be the priest fervent of body and soul!

(The Children resume their weapons as they are done with.)

The deacon now takes the consecrated Robe from the High Altar and brings it to her. She robes the priest in his Robe of scarlet and gold.

Be the flame of the Sun thine ambience, O thou priest of the sun!

The deacon brings the crown from the High Altar. (The crown may be of gold or platinum, or of electrum magicum; but with no other metals, save the small proportions necessary to a proper alloy. It may be adorned with divers jewels; at will. But it must have the Uraeus serpent twined about it, and the cap of maintenance must match the scarlet of the Robe. Its texture should be velvet.)

Be the Serpent thy crown, O thou priest of the lord!

Kneeling, she takes the Lance between her open hands, and runs them up and down upon the shaft eleven times, very gently.

Be the lord present among us!

So mote it be.

[ΙΑΩ] "IAO" is the Gnostic name of God equivalent to יהוה.

[lord] Kether, here indicating the root of the Tree of Life, and the element Spirit.

[chaos] Chokmah, here indicating the Right Pillar of the Tree of Life, and the element Fire.

[4] Note 1, p. 424:
In Crowley's copy of MAGICK, this name is replaced by that of AIWASS, Crowley's Holy Guardian Angel, but here used in a cosmic sense, the vehicle or medium of the Solar-phallic current.

[Air] Aleph, the path connecting Kether to Chokmah. This is the path of the Pure Fool, by which the Light begins its descent.

[babalon] Binah, here indicating the Right Pillar of the Tree of Life, and the element Water.

[baphomet] Tiphereth, the Middle Pillar of the Tree of Life, the balancing principle, and the element Air.

[Church] The "Church" here refers to Malkuth, the base of the Tree of Life, and the element Earth. With this, we have professed belief in all the Sephiroth governed by court cards of the Tarot and in the five elements, and have thus declared the Qabalistic nature of the working.

[ΑΥΜΙ'Ν] AUMGN, pronounced [very] approximately, "OM". There are three groups of three of these in the Mass: from the People (Mem), from the Deacon (Shin), and from the Priest (Alef). Refer to the 11th Aethyr of The Vision and the Voice: By three and by three and by three hath He made firm the foundation against the earthquake that is three. For in the number nine is the changefulness of the numbers brought to naught. For with whatsoever number thou wilt cover it, it appeareth unchanged.

[enters] The Virgin should enter from as close to the east (i.e., from the altar) as she can manage. She is at this point the messenger sent by the Ineffable to waken the sleeping Priest.

[Greeting] Here the Virgin gives the statement of intent of this working: heaven (the Supernals) will be united with earth (Malkuth). 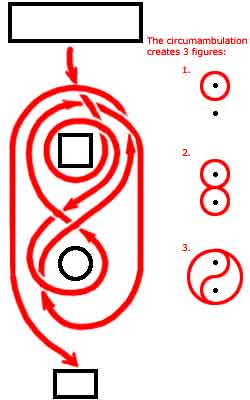 [17] Note 4, p. 425:
The crosses traced here are symbols of the Sun, Lord of the Macrocosmic Universe, and of the Phallus, the Sun's Viceregent in the Microcosm.

[from the Tomb] Here, the priest steps out of Malkuth.

[among men] "I am a man among men", IAAMAM, יאאמאם‎ = 93. Did Crowley know that? We don't know, but it is the sort of thing he would write into a ritual.